Never Too Late!
any resemblance to anyone real or imaginary is mere bad luck
we are all lying in the gutter, but some of us are trying to get up

I and some friends, we all go to see Synecdoche New York. I look it up afterwards, and apparently it was released early last year. It takes time to sub-title a convoluted epic like that into Portuguese.

As we wait for the film to start, I ask Mr Farewell- novelist and poker player of distinction - whether he ever hears voices. On or off drugs, he asks. I explain my conviction that - if you learn to hear it, if you learn to heed its voice, if you have the supreme courage to follow its lead, even when it leads to strange and insane places - you can trust the voice. It will always know. The voice of the deep mind, the voice of your daemon, in the ancient Greek sense, the voice of your holy guardian angel.

Synecdoche New York is a bizarre, sprawling, complicated film, one of those meta-narratives about a theatre production that flips and turns inside-out and swallows all the actors' lives and swallows the film you are watching and swallows New York City. It takes us about an hour afterwards to decide whether we even liked it or not, but walking out of the cinema, it is clear that this is no ordinary production. The dazed looks on the faces of the people walking out say everything. It is a long time since I saw a film that startled me so, that gave so much to wonder at and think about, even if it dragged at points.

Towards the end, after theatre director Caden has replaced himself with someone playing him, both in the theatre piece that has been growing and developing for 17 years now and in real life, now indistinguishable, and the set in its ridiculously enormous warehouse has expanded to encompass much of NYC, and the actor playing the director replaces the director and - I shouldn't be trying to explain -

and the new director gives Caden an earpiece, through which he hears...

yes, a little voice in his head. "Wake up now" it tells him. "Spend about 10 minutes staring melancholically at the view out of the window, and then yawn, get up and stretch..." And so on and on, irrevocably, until the final scene and the final instruction: "Now die."

We walk out of the cinema, walk down Consolação, and stumble across a new building site, some grandiose parking scheme. It is eerily like the film poster, the absurdly huge theatre set that houses a city, with its dirigible flying around inside.

I'm not all darkness! 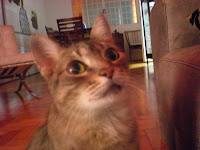 This is a cat which I thankfully no longer live with. Its Brazilian-ness shows in how affectionate ("carinhoso") and needy ("carente") it is.

I find it noteworthy because I have never met a cat like this before. It is almost like a dog in a cat's body. It wags its tail when it is pleased. It begs for food and affection. It responds to its own name. It has a compulsive need for attention. For all this it used to earn a vicious kick that would take it sailing behind the stove whenever it approached me with its fucking pleading puppy-dog eyes.
Posted by I.:.S.:. at 14:39

The hands race around the clock, the numbers flick forward on the time display. Clouds race across the sky, shadows rotate around their bases.

Then time lurches again, slows to an imperceptible crawl.

I cannot trust anything any more. I am becoming glued to my phone's digital watch display. I glanced away, once, and when I looked back three hours had passed, it was already evening and I had missed work. 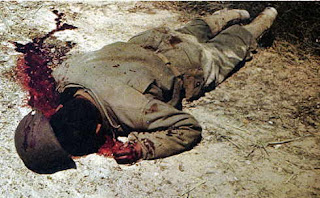 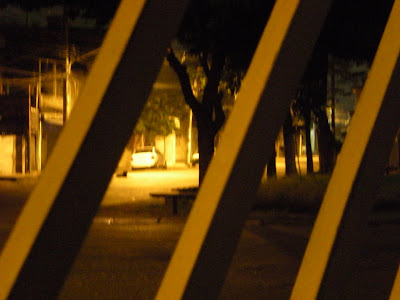 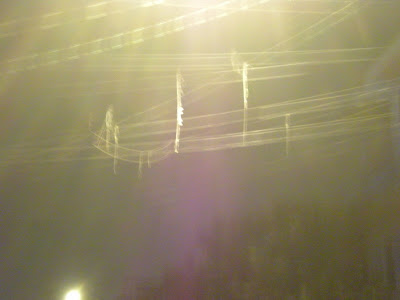 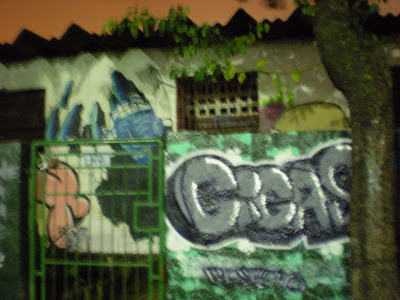 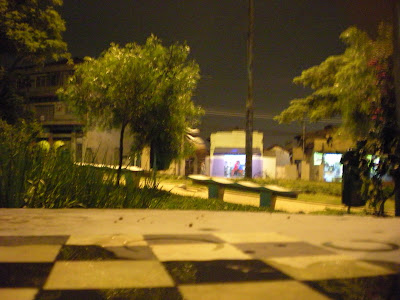 
[i miss being a heroin addict although i would never go back. life becomes so simple... the best year of my life, now in the delusion of retrospect, which i am not fool enough to fall for, was between summer '05 and summer '06, when i had a place to sit, a lot of interesting work, a doctor who wrote me morphine, and a sweet young girl... of course, you always have to pay everything back... this song evokes a deep nostalgia for that time...]
Posted by Lazy at 16:21

Geography is just an excuse.

The sky is out of tune and out of focus, like a broken black and white tv.

I'm going to get a cachaça and sit in Largo Sta Cecília by the church and watch the girls and pigeons and chat with the homeless dudes.

Wherever I go, the same discontent, the same longing for a place far away.

I like it here, but I miss a girl in England. ["hips like cinderella... lying there like you're tame..."] I'm a lot more sentimental and a lot less cold than I had thought. There are lots of girls here, after all, everyone keeps reminding me.

It's so goddamn arbitrary.

I got robbed last night, finally. Well they only got a packet of Marlboros, my travel card and about R$10. I held on to my phone for dear life, which is vital for the numbers, and sort of sentimental cause I bought it in Kabul and it writes text messages in Persian. I never walk around with my wallet, because it would be a disaster. I would probably wake up a week later under the minhocão with all my bank accounts empty.

And it was my own fault, anyway, which is fine and educational, otherwise I would be kicking myself. But there are places where you can't walk head down and lost in your thoughts. If I had been awake and walking fast and aggressively like I usually do it would never have happened. And not only that, but the little voice would have told me where to go. But I was perversely ignoring the little voice last night. (The little voice? Yes, the little voice. It knows exactly what's right for you. You just have to have the courage to follow its lead...)

I was incredibly impressed. In London, if five kids rushed you in the street, they would really fuck you up. Stab you, probably. These kids, street kids, eyes almost glowing with glue and hunger, came out of nowhere, and one each wrapped himself around my arms, legs and head, and dipped my pockets.

It was almost gentle. I hit one of them and bit the arm of the one trying to put me in a headlock, but they were gone. They had no interest in hurting me for the sake of it.

Everyone warns me about violence here. Not to walk in certain places at night. I do anyway. It is violence born of desperation. Not out of sheer malice and sadism, like you will find on almost any street in London. Violence is still violence for all that, and you will still be dead if someone puts a bullet in you. But.

So. I carried on walking. This old homeless dude of incredible dignity and gravitas who had seen the show called me over. I sat down with him there on the pavement. It was a dodgy side street in Republica that lots of people I know here would walk a mile to avoid. He said if it had got serious he would have intervened. I shrugged and sat there for a while and talked. I didn't really give a damn. He pointed out people on the street to me, empty ghosts moving in empty darkness: "Look, he's keeping look out... And look, that's a victim, wandering up that way all innocent..." A police car slowed to shine lights on us. A worried-looking civilian woman was looking out of the window with the cops. He greeted her as if he knew her, the car speeded on. "Do I know her? Hahaha. No, she's been robbed and they're looking around... But the cops drive that way, the robbers have always gone that way."

All the street people knew him. These guys came up and he handed them bread out of this big plastic bag he had. Another mugger passed by on his way rob someone and the old guy wished him luck. "You understood what he was talking about?" - "Yeah, he's on his way to work."

And then I walked. It was worth it, to meet Mario. I left him the last of my change, and then realised I didn't have any cigarettes, which led to the final comedy of the night. I stopped this guy on São João to ask him for a smoke, but he had just thrown away the packet and was on his last one, so he offered to smoke it with me.

Overly camp gay dude. "You're not Brazilian, are you?" - "No, I'm English." - "Really? I lived in London for three years!" and he drops into English. I generally refuse to speak English with most people, maybe on the "When in Rome..." principle, so I maintain my side of the conversation in Portuguese, smoke with him, and walk as soon as possible.

Is this blog really so unremittingly dark all the time? (Lazy aka Mikey laughs a lot. Too much, probably. You will have to blame me, the alter ego.)

Other contributions to the internet